A Dutch Saint and Catechist 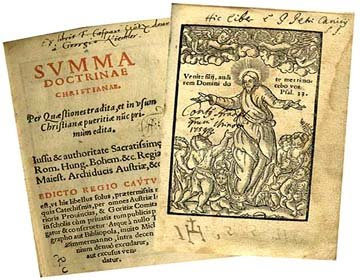 While I was reading about the start of the Jesuit order, I kept running across St Peter Canisius and accounts of his life. Today I found out he was Dutch, which is nice. My family name is Dutch and that side of the family came from the Netherlands. My father has traced back our geneaology almost to the time of the Renaissance. Who knows, perhaps we're related in some way. Anyway, it was nice to add a Dutch saint, particularly a Jesuit one, to my list of favorites.

St Peter Canisius was remarkable for his gentleness in a harsh, violent time and place. There are accounts of his life here and here. He wrote several catechisms at the request of his order.

The first issue of the Catechism appeared in 1555 and was an immediate success. Peter approached Christian doctrine in two parts: wisdom -- including faith, hope, and charity -- and justice -- avoiding evil and doing good, linked by a section on sacraments.

Because of the success and the need, Peter quickly produced two more versions: a Shorter Catechism for middle school students which concentrated on helping this age group choose good over evil by concentrating on a different virtue each day of the week; and a Shortest Catechism for young children which included prayers for morning and evening, for mealtimes, and so forth to get them used to praying.

I like the idea of choosing different virtues for middle schoolers, and the affirmation of the idea of getting young children into the habit of praying. These are both things I was planning for this year.

As intent as Peter was on keeping people true to the Catholic faith, he followed the Jesuit policy that harsh words should not be used, that those listening would see an example of charity in the way Catholics acted and preached

The "mild and conciliatory tone" for which Canisius was known, according to Father Schwickerath, was enjoined by the Jesuits, as exemplified by Father Nadal's words.

"both in the subject for written exercises and in the explanation of the catechism they should proceed with the greatest moderation. Especially in Gemerany, France, etc, they should not use any contumelious epithets against their opponents; nay they should not even style them heretics.."

We who are of the Society of Jesus wish to provide the little ones of Christ with the salutary milk of his doctrine. It is their welfare that we love and seek to promote.

Schwickerath says of Canisius and catechesis:

"One of the most essential qualities of a good catechist is kindness of heart and manners. This quality was a marked feature of Canisius' character, one which attracted the children to his instructions. The summary of the catechetical lectures which he gave in Augsburg has been preserved. Canisius began with the words of the Psalmist: "Come children hearken to me; I will teach you the fear of the Lord" (Psalm 33, 12). Then he continued: "Christ, our Lord loved the children and showed his affection for them in various ways. He blessed and embraced them and defended them against the Pharisees (Math 21, 15.16) and against his own disciplines (Matth. 18, 1-10). He said "Suffer little children to come unto me"....

....Following the examples of the Prophets, of Christ, and of the Apostles, I shall teach you not as wise and learned ones, but as children and little ones. Come, then, with a willing and cheerful heart; be convinced that it is a matter of the greatest importance for you to be justly called and truly to be sons of God. On your part, you must imitate the Child Jesus, who, in a manner, has given you an example how to learn the doctrine of salvation, when he set aside all else, left even his parents, and remained in the temple. Watch him there, see how he sits there quietly, listens to the teachers, and asks them questions. His questions are not about silly and useless matters, but about the great things of salvation. You must imitate him in this, now and ever in the future."

This plain and loving manner of speaking, from all accounts, was very successful.

Throughout his life, Schwickerath writes,

"Canisius found a special delight in giving catechetical instructions. The son of a distinguished family, the celebrated Doctor of Theology, and author of many learned works, the founder of famous colleges..... this man devoted every spare minute to the humble work of instructing children, and that not only in the cities where he resided, but on his many journeys, from one end of Germany to the other, he performed the same work of Christian charity among the simple country people. "

Peter Canisius's feast day is December 21, and he is the patron of the Catholic press, Germany, and catechism writers. He wrote something that might apply to homeschooling mothers of many:

If you have too much to do, with God’s help you will find time to do it all.