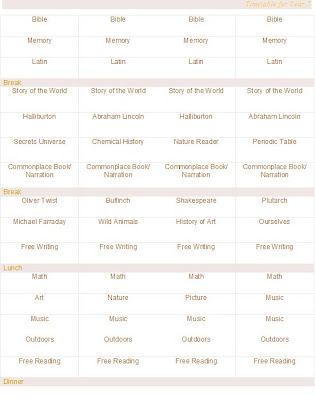 Another rough draft -- the Year 8 timetable for next year, Term 1. Here is the Word 2007 version and here is the RTF gray-scale version. You can click on the jpg on the left to make it bigger.

I can already foresee he won't get all of this done in a day.... hmm. It just looks too intense. His high school brother doesn't do this much in a day.

However, laying it out like this shows me what we're up against. Basically, the flow of the day will go like this:

Right after breakfast -- devotions and some studying he can do on his own. Meanwhile, I can work with the little ones.

Later -- little ones play or do discovery-type learning while I read with him or supervise his reading and listen to narrations. Then he has some sort of written project to do -- which I can supervise without being directly on task.

After lunch -- math on his own (with me as resource), then more project oriented things. Then we all go outside, then he reads or does his own things on the days we don't have anywhere to go.

So now the homeschool day for next year is worked out in rough form.

I'll be working through some of this in more detail as the summer unfolds. I'll tell you one thing though -- it won't be as complicated as last year's June planning. Never again, if I can help it.
Posted by Willa at 10:51 PM