I thought that now I'm starting this new blog and trying to consolidate all my different blog themes into one, it might be a good time to update on all the different aspects of my quotidian. I'll start with household management.

Recently I came to the full realization that I don't do well as the curator of a lot of things. Because I have a large family and all of them have their treasured "things" I will probably continue to deal with lots of things in my environment (especially books), but it was a relief to realize my natural bent is for radical simplicity. Now I can turn my attention to coping.

I went through the house and got rid of quite a bit -- probably 25% of the books and 40% of the toys, 20% of the board games and 10% of the arts and crafts supplies. My kitchen and clothes closets are already fairly simple.

Now I have enough room on the bookshelves to put some of the books that were in piles before. I took all the toys and centered them in the middle part of our loft, which is unofficially the "little kids' bedroom". It is the size of a room but does not have eastern or western walls. I've set up their beds in that room and the toys are on shelves. I took some pictures but they're not that beautiful. I didn't spend any money on organization because hey, the point of this simplification is partly to have less things around that we will possibly have to move in the future. So the container system is eclectic, and plastic/cardboard-y, and not beautiful, even though it is better organized than it was.

Do you still want to see? OK, but I warned you! 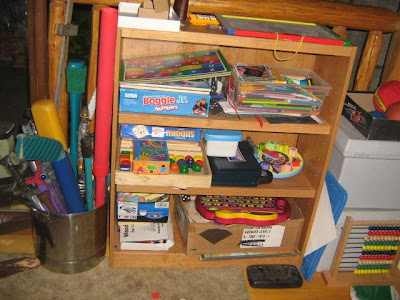 This is Aidan's "Montessori on the cheap shelf". It contains the various activities he loves to bring out and interact with day after day. Wooden beads, HWT letter forms, V-tech phonics board, clock puzzle, pencils and alphabet puzzles are some featured items.

As a bonus you can see the little boys' "weapons and sports implements contained in an oversized spaghetti pot" center. Paddy uses that center a lot more than Aidan does.

I put the construction toys on the window seat, which presently operates as a large toy shelf. 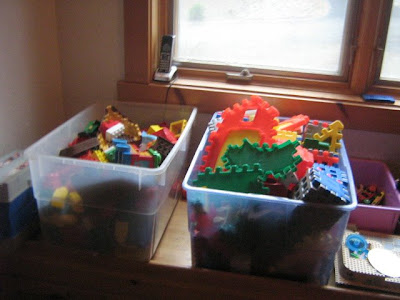 Also on the window shelf are hotwheels, Lord of the Rings Action figures, and large vehicles, oh, and Aidan's top center-- 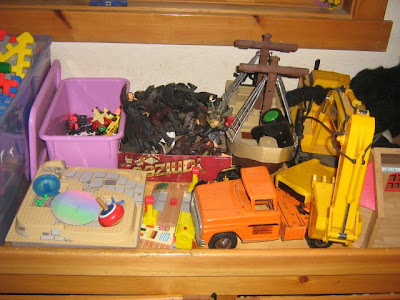 And Paddy's stuffies, which are his most played-with toys. 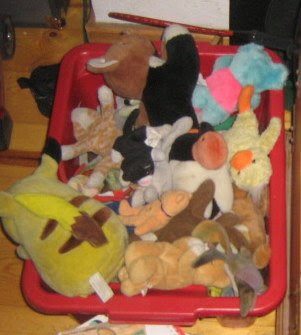 Aidan can spend the whole day going from one activity to the other. Paddy is not like that. Aidan has not learned to put things back after he has played with them, unless I direct him to do so. If I'm gone or otherwise occupied for a few hours and come back I can see a visual-spatial record of everything that engaged his attention while I was gone.

It's been interesting to see what they will take out and use if everything is open to their gaze. Aidan loves literacy activities. Paddy loves books. Paddy loves stuffies and action figures. Aidan loves things that spin. Both enjoy Hot Wheels and construction toys.
Posted by Willa at 7:51 AM