Today is Liam's birthday and I was searching to find the saint associated with this day. It turns out to be Adam Chmielowski, an interesting person. He was a Polish soldier and artist, and became a Jesuit. I actually remembered his name from reading Witness to Hope, the biography of Pope John Paul II. Karol Wojtyla wrote a play about him back in 1949. There's a bit more information about him here, and here. He eventually gave up painting to be of more service to the poor. 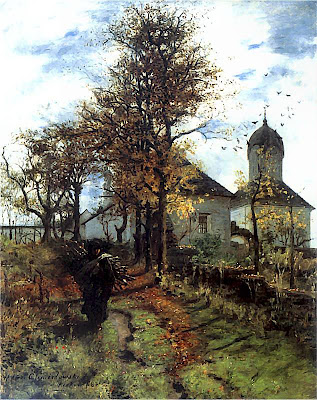 I was questioning him -- Liam, that is -- today about Truth because of a question that came up on a classical list and he said:

The true that is in things is convertible with being

It is a quote, of course. I love that though. I have just read two books in quick succession that deal with modern acedia -- The Bell Jar by Sylvia Plath, and The Movie-Goer by Walker Percy -- and it brings back some of my more acedic moments in my teenage days. And I think that really is what saved me back then, though I don't think I'd even heard of Aquinas and I certainly wouldn't have paid much attention to such a sentence.

And one other thing that got me through some difficult moments was the possibility of the completely unpredicted happening, like a son saying that to me. It would be outside the stratosphere of anything I could plan or prophesy.

Binx Bollings, in The Moviegoer, at one point says that he felt that if God appeared to him face to face, he wouldn't feel any different than he did. Nothing could bring him out of that peculiar form of modern malaise. But I never got to that point. A sentence like

The true that is in things is convertible with being

or, as Augustine says

"That is true which is."

is an antidote, for me, to the despair of every-dayness. It is like the language of a mysterious land a long way away.
Posted by Willa at 9:39 PM